Eugene Istomin was immediately enthusiastic about Daniel Barenboim’s extraordinary talent. He approved of and encouraged the young musician in the early years of his career, but later on, he worried about his bulimia of concerts and recordings and told him so with his customary frankness. Before his 30th birthday, Barenboim had already recorded all the Mozart Concertos and all of Beethoven’s works with piano: the Concertos with Klemperer, the Violin Sonatas with Zukerman, the Cello Sonatas and Variations with Du Pré, the Trios with Zukerman and Du Pré, and the 32 Sonatas for solo piano. In three days, Barenboim recorded the complete Beethoven Trios, despite having practically never performed them before in concert. Istomin had worked on and played them with Stern and Rose for nearly ten years before recording them. Completing the recording took his elder nine days in the studio over a period of five years. For Istomin, it was a lack of respect for the music, and a considerable waste. All these recordings revealed an immense talent, but also gave a feeling of incompleteness. It would have been so much wiser to wait for a few years and record them gradually. Istomin rightly feared that Barenboim would never take the time to deepen his interpretations and fulfil his potential.

Daniel Barenboim did not accept Istomin’s remarks with good grace, and held it against him. He never invited him to come and play under his direction, as well as discouraging his friends from doing so. Jean-Bernard Pommier, who was very close to Barenboim for many years, tried in vain to bring them closer together. Their approaches were so contradictory that they were irreconcilable. 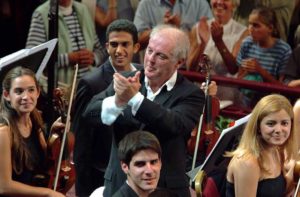 Barenboim and the West-Eastern Divan Orchestra in Salzburg (2007)

As far as Israel was concerned, their viewpoints seemed much closer. Both of them believed that Israel should lift the ban on German musicians and that lasting peace would not be possible without extending a hand to the Arab countries and their people. In 1978, Istomin was the soloist together with the first- ever German conductor invited by the Israel Philharmonic, Klaus Tennstedt. Istomin had to face hostile reactions from the musicians of the orchestra, the press and the public and he was happy to help in appeasing them and overcoming their prejudice. The following year, after the signing of the Israel-Egypt Peace Treaty, he became the first musician to give masterclasses and concerts in Cairo and Jerusalem, and to propose a regular Israeli-Egyptian musical collaboration. Istomin lent his support to Barenboim when he braved the ban on Wagner’s music in 2001, and he applauded the creation of the West-Eastern Divan Orchestra. However, he tended to disapprove of the spirit of provocation which often accompanied Barenboim’s actions and which consequently made them less effective in changing the mind of the Israelis.

Daniel Barenboim in Cairo, conducting the Cairo Symphony Orchestra in 2009. Report and interviews.