« He sits in the midst of an art collection that could justify establishing a small museum: Giacometti’s portrait of Stravinsky looks down benignly on a row of Matisse, Léger and Gris. Three Picassos create a retrospective of the Catalan genius‘s career: from an important 1907 watercolor of Three Women once owned by Gertrude Stein to an intensively personal 1959 bullfighting scene.” This is how Octavio Roca described Istomin’s apartment in an interview published in The Washington Times on March 15, 1992. It was entitled “Istomin: Championing the Humanity of Music”. 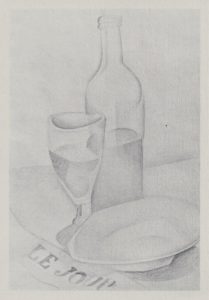 From early on Istomin found it natural to surround himself with books and art. He could not live without them. He never bought a car and did not own a home until he settled in Washington with Marta in the early 1980s. He spent all his money on books and art! The range of his interests was very broad, and his curiosity ever alert. Paintings of the twentieth century were central to his attention. The closest relationships he built with contemporary painters were with artists who were nurtured by a great knowledge of the story of their art and who were concerned with music and literature. This was of course the case of Avigdor Arikha, but also of Norris Embry, Barnett Newman, and Richard Diebenkorn.

Movies were a childhood passion which allowed him to escape from the daily drudgery of  piano practice and the constant quarrelling of his parents. The characters and actors lived continually within him, and he often referred to them as portraying people in actual life. From the early 1950s, he no longer had time to go to the cinema, but he felt a sense of nostalgia for old movies, and watched them on television either on late night broadcasts or from his collection of videocassettes.