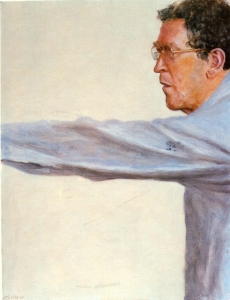 “I met Eugene Istomin for the first time in March 1965, at the castle of Baroness Alix de Rothschild, who at that time was my sponsor. She chaired Youth Aliya, an association which helped the immigration of young Jews in Israel. Eugene had agreed to give a benefit concert for the association. We later met at her home, at the Châteaux de Reux in Normandy. Ever since that day, Eugene and I were very close friends, until he passed away.

From our first meeting, he wanted to know my life story, which affected him immensely. In 1941, when I was twelve years old, I was deported with my family to a concentration camp in Ukraine, where we worked in a foundry which made ammunitions for the German army. There were about twenty Ukrainians and eight hundred prisoners. I had begun to draw at the age of nine, and had continued in the camp, as much as I could. A prisoner had gathered around thirty of my drawings in a makeshift binding, which I hid. One day, a guard found it. At first furious, as he flipped through the drawings he softened and said: ‘My child, you are playing with fire!’. He destroyed thirteen of the drawings, the ones which depicted the atrocities of the camp in an overly explicit way, but kept the other seventeen, and promised to show them to the Red Cross Committee who were due to visit a few days later. On March 6, 1943, a Friday, I was released with my sister and sent to Palestine with a small group of children. In 1948, I participated in the Israel War for Independence and was injured. The year after, I came to Paris to study at the Ecole des Beaux-Arts. I also attended philosophy classes at la Sorbonne. I was 20 years old.

1965, the year I met Eugene, was a crucial one for me. I had decided to turn my back on abstract art just as I was beginning to enjoy success. From now on, I wanted to draw and paint only from life. It was not a rejection of abstraction, but an irresistible call to something that I felt was essential.”

The art of Avigdor Arikha 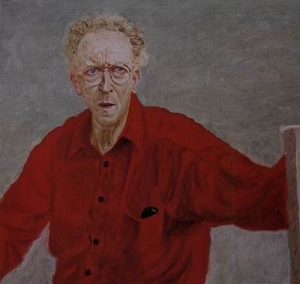 In Arikha’s obituary which he wrote for The Independent, Marco Livingstone summarized his evolution and philosophy: “Arika was unapologetically sure of the path he had taken after first making his name as painter of refined, sensuous and intellectually rigorous abstractions… He was truculently insistent that he was not part of any ‘return to figuration’, but rather had found his own way as ‘a post-abstract representational artist’.” A few years earlier, Livingstone reported on Arikha’s demand for immediacy and truth: “He insists on saying that only what can be seen is true, and that it should be painted alla prima or drawn in a single session. He tells us that we can only trust the place and the moment. The past, in his opinion, is subject to all sorts of re-interpretations, and the future is just a matter of speculation.”

This meant that painting or drawing was an art of the moment, akin to dancing or playing the piano. Such a quest, which went against the flow of fashion, this could not fail to seduce Eugene Istomin, who was himself seeking an unattainable ideal. Istomin was also very impressed by the erudition of Arikha, who was a globally acknowledged expert of Poussin and Ingres, and by his considerable knowledge of all periods of art history. 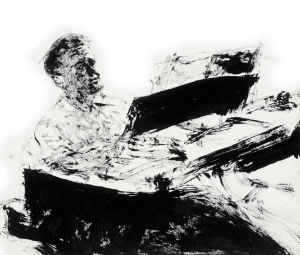 The first exhibition by Arikha in the United States took place in 1972 at the Marlborough Gallery, and was followed by many others. Arikha came frequently to give conferences at universities or major American museums. Whenever possible, Arikha stayed at Istomin’s, where they spent entire nights talking, playing or listening to music, eating and drinking… For his part, Istomin visited Arikha whenever he performed in France or had a stopover in Paris. They were often joined by Samuel Beckett.

According to Marco Livingstone, an evening with Arikha could be an intense experience, “with topics ranging from Michelangelo to modern literature, to the frontiers of science and technology. Given his sometimes forbidding seriousness and the strictness of his opinions, which included a loathing of contemporary popular culture, his laughter always came as a welcome and joyous surprise. He was a human being of rare integrity, guided by his formidable intellect and his passions, and an artist of consummate grace who breathed life onto the surface of every canvas and every sheet of paper he touched.” Many of these personality traits could also be applied to his friend Istomin! Their friendship was built on mutual respect as artists and as human beings. What struck Arikha most was Istomin’s generosity, his attention to others, whoever they were, and his sense of self-mockery. Their discussions could be very passionate, at times almost tense. 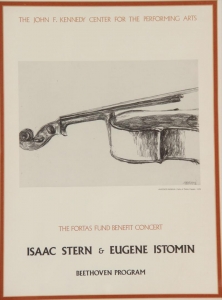 “I would accompany Eugene from time to time to galleries or dealers. I advised him on some purchases: a drawing by Matisse, a painting by Soutine, a pencil drawing by Juan Gris, another by Fernand Léger (Musical Instruments!). But most often he would decide for himself. For a non-professional, he had a good eye. Sometimes he got excited and launched into extravagant spending! I remember seeing Eugene arrive one day in an exuberant state: he had found an extraordinary lithograph on Quai Saint-Michel of Ibsen at the Grand Hotel Café in Oslo. It was a print on Japanese paper, whose price was undoubtedly excessive, but he was so enthusiastic that he did not even think of this.”

“One evening, when my wife Anne cried while reading her poems, Eugene ventured a friendly reproach: ‘It’s up to the audience to cry, not the artist!’ He himself respected this rule when he was playing the piano. The emotion had to come from the music, not from the grimaces of the pianist.”

“Eugene wanted to publish a book about me at HBJ. He prepared it in secret and asked Samuel Beckett, who was an old friend of mine and had become one of his, to write the text, but due to HBJ’s financial difficulties, the project was not completed.”

“I have many wonderful musical memories of him, alone or with Stern and Rose. I had the feeling that he was the soul and essence of the trio, its musical conscience. Today, if I had to mention only one concert, it would be the last time I heard him. It was in Evian, in 1997, Mozart’s Concerto No. 21 with the Franz Liszt Chamber Orchestra. I was sitting next to Jean-Pierre Rampal who was also moved to tears.”

Istomin often served as a model for Arikha. He had a collection of thirty-nine drawings, some which he had bought and others which were gifts. Among them were several portraits of himself, his mother, Marta, Jean-Bernard Pommier, Samuel Beckett, Anne Arikha, and several self-portraits.