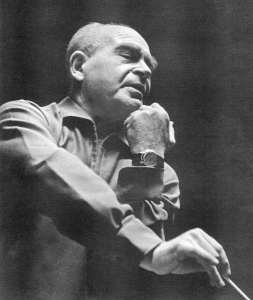 Paul Kletzki (1900-1973) was once a very promising composer and conductor, supported by Toscanini and Wilhelm Furtwängler, who had invited him to conduct the Berlin Philharmonic in 1925. After being forced to flee Nazi Germany, followed by fascist Italy and the Stalinist Soviet Union, he eventually settled in Switzerland. Overwhelmed by the horrors of the Second World War, in which he lost a large part of his family, he gave up composition, feeling that his inspiration had been depleted, and devoted himself entirely to conducting. As a naturalized Swiss citizen, he had the honor of being chosen in 1967 to succeed Ernest Ansermet as music director of the Orchestre de la Suisse Romande. In that same year, he recorded a highly acclaimed complete set of the Beethoven Symphonies with the Czech Philharmonic.

Istomin met Kletzki in America when he was music director of the Dallas Symphony, from 1958 to 1961. Afterwards, he joined him for two wonderful concerts in Montreux and Paris. Their mutual understanding came naturally, as they both shared a scrupulous respect for the score and the will to put themselves entirely at the service of the composer.

No available information about their concerts in Dallas.

Beethoven. Concerto No. 4 in G major Op. 58, second and third movements. Eugene Istomin, Warsaw National Philharmonic. Paul Kletzki. Recorded live in Montreux on September 10, 1963 (the first movement of this outstanding performance is available in the article dedicated to Beethoven).