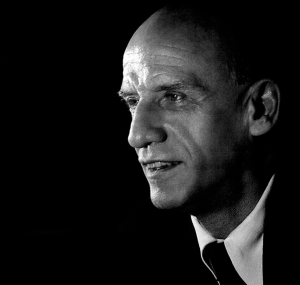 Early on in his career, Eugene Istomin asked Arthur Judson, his first manager, to play in Minneapolis under the direction of Dimitri Mitropoulos, but Judson refused. He was fascinated by the complete involvement which Mitropoulos was able to obtain from his orchestra musicians and would have enjoyed sharing this energy. Istomin’s wish was granted only in 1957 when Mitropoulos invited him to play the Beethoven Emperor Concerto in New York. It was a timely invitation, since it turned out to be Mitropoulos’ last season as musical director of the New York Philharmonic. 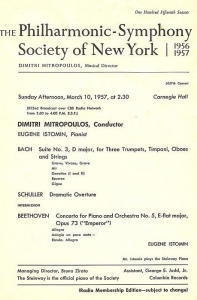 Istomin had been appalled by the manner in which Mitropoulos was expelled from New York, as a result of malicious gossip about his homosexuality. His fairly monastic way of life and the absence of women beside him were enough to feed the odious rumors which ultimately destroyed his reputation and his relationship with the musicians of the orchestra. Mitropoulos was asked to share the musical direction for the 1957-58 season with Bernstein, who at that time seemed to be a paragon of conventional family life. The next season, Mitropoulos was forced to resign.

It should be noted that when Istomin asked Mitropoulos to lend his financial support to the Prades Festival, he accepted with pleasure and remained on the list of patrons until his death.