The Istomin-Stern-Rose Trio was meant to be the successor of the Cortot-Thibaud-Casals, and eventually overcame its longevity record: 28 years, as opposed to 27! It should be noted that in the three last years of the Trio’s experience, Istomin, Stern and Rose performed only on very special occasions, not in normal concerts – but they were ahead of their prestigious elders in regard to the number of concerts (more than 200 compared to 160) and recorded works (19 against 6). Of course, some permanent formations, like the Beaux-Arts Trio or the Trio di Trieste, lasted much longer and gave many more concerts, but the concept is very different, as it assumes that the chamber music works of the great composers have the same ambition and intrinsic value as their symphonies, concertos or works for solo piano. In consequence, these works need outstanding soloists in order to reveal their true dimensions. 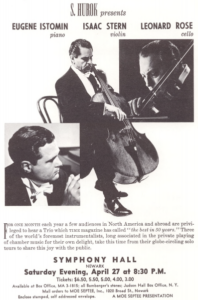 As the history of this particular chamber ensemble shows, it is very difficult for three musicians with strong personalities, who are used to having their own musical approach, to establish a lasting relationship by exploring the rich but very demanding repertoire for piano trio. It is a fascinating adventure, on a human as well as musical level! You will find it here, described in four episodes, corresponding to the main phases of the trio’s experience. In addition, there is a summary of the difficulties that any trio for piano, violin and cello must confront, and of how Istomin, Stern and Rose managed to deal with them. Lastly, there is the unpublished account of this adventure, as written by Eugene Istomin in 1990.

Many people considered Istomin to be the soul and mainspring of the Istomin-Stern-Rose Trio. Due to his close relationship with Casals, Busch and Serkin, he was also a living link to the two most famous trios of the first half of the twentieth century. Istomin stressed that the essential reason of their success was a mutual understanding, and even complicity: “Our basic unity on musical ideals never wavered – nor did our capacity to attain that most intimate of communications that musicians can have with one another. In later years, after long periods apart, it only took a few bars to re-ignite that un-learnable and un-rehearsable spark between us.” 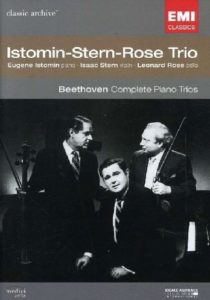 Today, the performances of the Trio are still the main references, along with those of Cortot-Thibaud-Casals and a few more recent isolated achievements. The recordings made by Columbia between 1964 and 1979 have been regularly reissued by Sony. EMI released the complete Beethoven and Brahms Trios on DVD in the Classic Archives series. They were filmed by French Television in 1970 and 1974. Due to their perfection and freshness, these performances are even more impressive, as they were recorded in a single session, with the added tension of television performances at a time when editing was impossible.

The Trio’s discography spans nearly all of the repertoire they performed in concert, except for the Ravel Trio and the Mozart K. 502. They had begun to record the Ravel, but were unsatisfied with the result and abandoned the project. Mozart’s Trio K. 502 was recorded, but Columbia lost the tapes. Their repertoire of recordings mainly consists of the most famous works for piano trio by Beethoven, Brahms, Schubert and Mendelssohn. The only frustration is that they did not tackle the Schumann Trios. In any case, their main mission, which was fulfilled far beyond their own expectations, was to popularize these great masterpieces of chamber music, which were known only to a limited audience, especially in the USA.