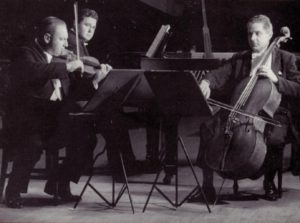 One of the first concerts in the US

In the spring of 1962, encouraged by the enthusiastic reception they had received the previous year in Israel and England, the Istomin-Stern-Rose Trio set out to conquer New York and overcome American prejudices about chamber music. As a prelude, in order to arouse public and critical curiosity, Istomin, Stern and Rose performed Beethoven’s Triple Concerto at Carnegie Hall with the Symphony of The Air conducted by Alfred Wallenstein. As they did not yet dare to play in Carnegie Hall at that time, they gave two concerts in the Auditorium of the Metropolitan Museum. On May 3rd, they played the Beethoven Op. 70 No. 2, Ravel, Mendelssohn No. 1 and on May 6th, the Beethoven Opus 70 No. 1, Brahms No. 2, and the Schubert No. 1. The critics were ecstatic about both the virtuoso perfection of their performances and the respect for the very essence of chamber music. Paul Henry Lang wrote in the Herald Tribune: “Three great musicians played as if for themselves, to their satisfaction and we just sat there thankful that such a thing is still possible!”

The Trio at the White House

A few days later, a major political and cultural event completed the launching. Kennedy welcomed André Malraux to the White House to celebrate the arrival of the Mona Lisa in America. All the American intellectual elite were in attendance, and the Istomin-Stern-Rose Trio was asked to come and play for this prestigious audience! In no time at all, the Trio became one of the great attractions of American musical life, whereas before, chamber music had never really gained a place in the United States. From that time on, Eugene Istomin, Isaac Stern and Leonard Rose devoted at least two months each year to the activities of the Trio.

In 1963, they even took three and a half months, from early July to mid-October, barely interrupted by a few concertos that each member was scheduled to perform. They gave about forty concerts in Europe and Israel. They were invited by the major summer festivals (Edinburgh, Montreux, Lucerne, Divonne, Menton, Aix-en-Provence) and took part later on in the new season’s opening concerts in many major cities (London, Milan, Florence, Copenhagen, Stockholm…). In July, they made their first television broadcast, playing a movement of the Schubert Trio in B flat major at Aix-en-Provence Festival. 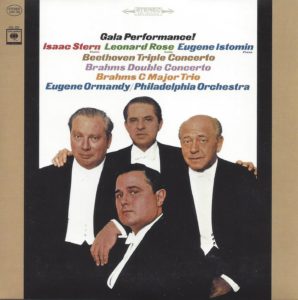 A gala performance for the benefit of Carnegie Hall

1964 was reserved for the United States and marked a new stage. The Trio had scheduled two concerts in New York and decided to give the second program (Beethoven, Kakadu Variations; Brahms, Trio No. 3; Schubert, Trio in B flat major), at Carnegie Hall! The success was such that it was necessary to add several hundred seats on the stage. In its May 15 issue, Time Magazine published a brief report and gave the three musicians a chance to express themselves: “Last week, the Istomin-Stern-Rose Trio, firmly established as the best trio in fifty years, played their fifth sell-out concert of the season to a house so full and enthusiastic that it made even Carnegie Hall seem just the right size for chamber music. (…) Each of the three has discovered in the trio a reward beyond mere music. ‘There are many miraculous little things that can happen during each performance’ says Rose. ‘We play to one another in a sort of musical conversation’, says Stern; ‘Music is something to revel in – and when we play together we revel. I am so proud of this trio that I want to shout it from the rooftops.” As for Istomin, he agreed with his partners, considering that they should not give too many concerts in order to preserve freshness and enthusiasm: “We want to keep it gala”. This year, 1964, also saw the Trio make its first official recordings: the Beethoven Triple Concerto, the Brahms Trio Opus 87, and the Schubert Trio in B flat major.

1965 was divided between America and Europe. There were a few concerts in America in late spring, one of which was filmed by the Canadian Television (Beethoven Op. 1 No. 3 and Brahms No. 2). During the summer, they performed the Beethoven Triple Concerto several times at major festivals (Robin Hood Dell, Tanglewood, Hollywood Bowl). In Europe, Istomin, Stern and Rose recorded Beethoven’s Archduke Trio at Winthertur, and gave their first concert in Paris at the Théâtre des Champs-Elysées (Beethoven Opus 11, Brahms No. 1, Beethoven Archduke). 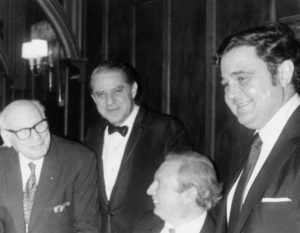 The Trio with their manager Sol Hurok

In 1966, the Trio’s activity was intense, especially in terms of recording. Istomin, Stern and Rose completed the Brahms Trios by recording the First and the Third at the end of August, then taped Beethoven’s Trio Opus 1 No. 3 and the Mendelssohn Trio Op. 49 in early November. They spent three weeks, straddling July and August, in residence at the Detroit Symphony Orchestra’s Summer Festival at Meadow Brook, where they alternated performing concertos (for Istomin, Brahms No. 2, Beethoven Triple and No. 4, each twice) and trios. They also gave master classes, each member having invited a student: Jean-Bernard Pommier, Pinchas Zukerman, Lynn Harrell. In the autumn, they made a triumphant tour of the major American cities. 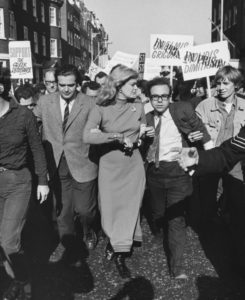 Melina Mercouri protesting against the military dictatorship in Greece

The years 1967 and 1968 were calmer. There was no recording in 1967, and only two short works in 1968 (the Haydn Trio in E flat Major Hob. XV:10 and Beethoven’s Kakadu Variations). They also wanted to record the Ravel Trio, but dissatisfied after the first session, abandoned the project. They scheduled relatively few concerts, but strangely enough, several of them were engulfed by special political contexts. In 1967, after an invitation to Montreal for the World’s Fair, they were to give two concerts at the Athens Festival, in Herod Atticus Theater, just a few weeks after the military coup. A committee of American artists and intellectuals, led by Leonard Bernstein and Melina Mercouri, had called for a boycott of all cultural events in Greece. Istomin, Stern and Rose hesitated, but in the end,  they decided to play, while attempting to show their opposition to the new regime as clearly as possible. At the end of July, they gave three concerts at the Israel Festival, a few weeks after the Six Day War, in the euphoric atmosphere of the aftermath of victory. In 1968, the Trio added the Schubert Trio in E flat major to its repertoire, and performed it for the first time at the Edinburgh Festival. 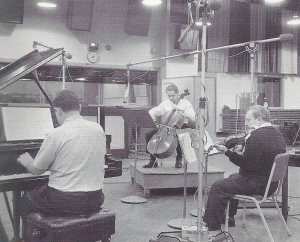 A recording session in the Columbia studio on 30th Street

In 1969, the Trio gave even fewer concerts, but there were some memorable evenings, such as the one at Carnegie Hall on May 15, where they played the Beethoven Opus 70 No. 1, Brahms No. 3, and the Schubert Trio in E flat major. Allen Hughes ended his review in the New York Times with: “If it was not perfection, it was as close as human capacity would allow.” At the same time, they were paying regular visits to Columbia’s famous New York Studio on 30th Street. There were sessions in May, July, November and December! The output was very rich, with the Schubert Trio in E flat major and seven major works by Beethoven: the Trios Opus 2 No. 2, Opus 11 and Opus 70 No. 1, two violin sonatas (No. 1 and No. 7), and two cello sonatas (No. 3 and No. 5). Istomin, Stern and Rose were already looking forward to the challenge they had decided to take up for the bicentennial of Beethoven’s birth, and one that no musician had ever dared before: to perform Beethoven’s complete chamber music with piano in a series of eight concerts!

Haydn. Trio in E flat major Hob.XV:10, first movement (Allegro Moderato). Eugene Istomin, Isaac Stern, Leonard Rose. Recorded for Columbia on August 23, 1968. The only Haydn trio ever played by Istomin-Stern-Rose. Due to the lack of coherent coupling, this recording was not issued until 1985 (in a 4 LP box set for Stern’s 65th birthday).