Eugene Istomin was very fond of B movies, which often featured Ronald Reagan. It was not a sufficient reason to approve of his political ideas. When Reagan was elected President of the United States in 1980, Istomin thought of leaving his country, abashed to see his ideal America sink into uneducated conservatism. If Marta had not recently been appointed Artistic Director of the Kennedy Center for the Performing Arts, he might have acted on this impulse. 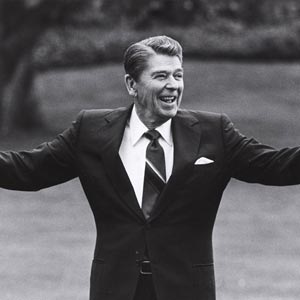 Due to circumstances, Istomin happened to take part in the celebratory concert for Reagan’s inauguration. Rudolf Serkin was scheduled on January 21, 1981 to be the soloist of the National Symphony at the Kennedy Center in honor of the new President. A few days before, Serkin announced that he was not able to perform. He was not ill but he disagreed with Reagan’s ideas. His children, who disapproved of them even more, pressured him into cancelling. As the musical director of the National Symphony, Rostropovich was in charge of this concert and he was embarrassed. Knowing that Istomin was available and that he had just performed Mozart’s Concerto K. 467 with the San Francisco Symphony, Rostropovich used all of his persuasive skills to convince Istomin to replace Serkin. Istomin agreed out of friendship for Slava and respect for the presidential institution, Istomin agreed, while making clear that he had not voted for Reagan. Rostropovich had never conducted this famous concerto, and he was reassured to be preparing it with Istomin, who came at once and played it for him.

The situation became comical when Nancy and Ronald Reagan came backstage before the concert. Harold Schonberg, the renowned New York Times critic, was there and behaved as if he were a close friend of Istomin, whereas in reality, he had been bad mouthing him for the past thirty years. 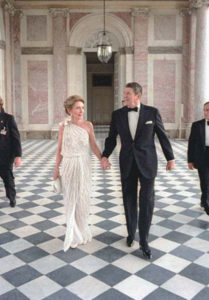 Nancy and Ronald Reagan in Versailles

In the first part of the concert, after the American national anthem, Rostropovich conducted Korngold’s music for King’s Row, a movie which was very successful when released in 1942, and established Reagan’s fame as an actor. The new president and the vice-president, George Bush Sr, left shortly after and did not hear the Mozart concerto which proved to be, according to Paul Hume, the Washington Post’s critic, “the evening’s great music.”

Culture in general, and particularly classical music, were neither Reagan’s cup of tea nor a political priority. Istomin smiled ruefully when he was told that at the G7 summit in 1982, Reagan dozed off at the Versailles Royal Opera House while listening to Lully, and that he made a complete fool of himself when greeting William Christie after the concert.