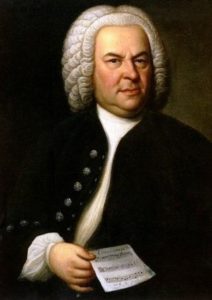 Unfortunately, the harpsichord was making an unexpected comeback in the musical world, with Wanda Landowska and later, Ralph Kirkpatrick as the leading figures. For the critics and purists, playing Bach on the piano became increasingly controversial from the late 40s. Glenn Gould was an exception, but Istomin could not imagine adopting such a restriction of the expressive capacities of the piano. He thus refrained from performing any more Bach, except on very rare occasions when he played the concertos for two or three pianos with Serkin, Horszowski or Pommier. The only work he continued to play was the Toccata BWV 914. Nevertheless, his love for Bach remained, and when he ended his career, he placed the Well-Tempered Clavier on the music rest of his piano every day.

Bach with Busch and Casals 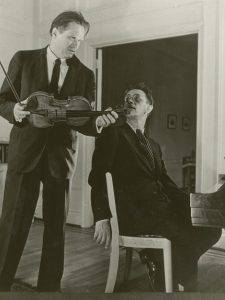 Istomin collaborated successively with both Busch and Casals. Before building profound musical and human links with Casals, he had been close to Busch and had performed under him more than one hundred times, even playing the continuo in the orchestral works of Bach or Handel. With the benefit of hindsight, Istomin thought that the differences between these two great musicians were not so important. Busch was more rigorous, without the sensitivity and freedom which was Casals’ trademark. Casals’ flexible phrasing, rhythmic vitality and intensity of accentuation were unique and quite revolutionary at the time. Istomin recalled that Busch spoke frequently about Casals. He acknowledged that Casals was wrong, but that his result was far better than the musicians who were right. Casals was such a great artist! Busch felt that Casals took too many liberties, but conceded that the result was grandiose. As for Casals, he deeply respected Busch, but mentioned him quite rarely.

Serkin’s opinion of about Casals was close to that of Busch. He once wrote to his wife, Irene (Busch’s daughter) from Prades: “Casals is a wonderful lovable man, who makes music with love and spirit, somewhat Spanish, but in Bach too, a lot of fire can be beautiful”.

Istomin learned the Toccata in E minor BWV 914 (as well as the Partita in C minor BWV 826) especially for the 1950 Prades Festival. When Istomin visited Casals before the beginning of the Festival, he played it for him, to Casals’ great enthusiasm! Istomin subsequently abandoned it for nearly twenty-five years due to the prejudices against playing Bach on the piano. He finally took it up again in 1975 and played it until the end of his career. He loved the piece and said: “All Bach’s genius is there, condensed into six minutes”. 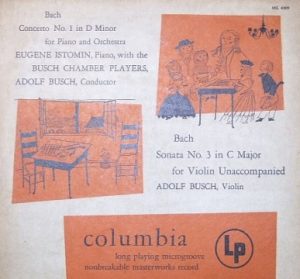 This is the concerto Istomin played the most often during his two big tours with the Little Orchestra under Busch in 1944 and 1945. He was so successful everywhere with this concerto that Busch himself requested that it be included in his recording program for Columbia, contrary to the original plans. In April 1945, at the Liederkranz Hall converted studio, a single session was enough to satisfy the producer, Goddard Lieberson, who would soon become the director of Columbia’s classical department. Istomin was quite proud of the result and the reviews were excellent. This first record was a wonderful promotion for the young pianist who was to give his first Carnegie Hall recital a few months later.

In the Prades Festival 1950, Rudolf Serkin was scheduled to play and record the Brandenburg Concerto No. 5 under Casals. He actually performed it in the concert but did not agree to record it, due to his loyalty to Adolf Busch. This was not because of Casals, but 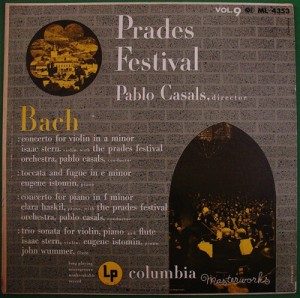 due to Szigeti, who was the violin soloist. Serkin had recorded the complete Brandenburg Concertos in 1935 with Busch playing and conducting. Serkin felt that he would be betraying Busch if he recorded this concerto again with another great violinist of the same generation who, despite being a very fair person, was actually a rival. Istomin was asked to replace Serkin for the recording sessions. He had only a few days to learn this concerto which he had never played before, with its difficult and explosive cadenza. It was a huge challenge which he fulfilled magnificently. His colleagues were enthusiastic, in particular Szigeti who told him that under his fingers the cadenza unfolded like a novel.

Istomin would play this concerto only twice more, once at the Menton Festival in 1963 with Isaac Stern and Jean-Pierre Rampal, and again at the Casals Festival in Puerto Rico in 1972 with Alexander Schneider and John Wummer.