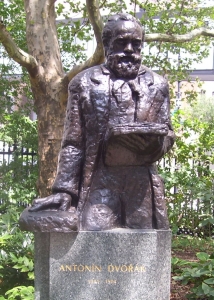 In an interview with John Tibbetts, Eugene Istomin expressed his admiration for Dvořák’s music and underlined its relation with Brahms’: “I recall what a privilege it was to have this great composer here. We do not pay enough attention to the considerable amount of civilization we have in America. The same for Mahler. I think that it is important that people interested in great music and great musicians know that a great composer of the 19th century spent an important part of his creative life here in America. Musicians and music lovers would have no doubt Dvořák is a great composer, he was highly considered everywhere except in France. Brahms really loved him, but not Debussy and the French composers. You probably know this anecdote from 1911 or 12 – the scandal of Casals refusing to play Dvořák’s Cello Concerto under Gabriel Pierné, who despised Dvořák’s music. Pierné said that it was “de la cochonnerie” (junk) and Debussy did not refute his comment. Casals cancelled and then lost the lawsuit, and had to pay. When you listen to the recording Casals made in 1937, you can understand the full magnitude of the work. It is the greatest cello concerto ever. It is a pity that his piano concerto is not on the same level as the cello concerto or even of the violin concerto which is a great work. I played his Piano Quintet many times with the greatest pleasure!”

Istomin also recalled the major role which Dvořák played in the development of American musical life, giving a patina of nobility to American popular music by using it in his own compositions, teaching countless students and broadening the tastes of the public. For Dvořák’s Quintet Op. 81 Istomin was notably partnered by the Kroll Quartet, the Budapest Quartet and the Guarneri Quartet.

Antonín Dvořák. Quintet for Piano and Strings in A major, Op. 81. Eugene Istomin, piano. Budapest Quartet. Library of Congress, November 11, 1961. By that time, the Budapest Quartet was no longer a paragon of perfection, but this recording is still a fascinating document.