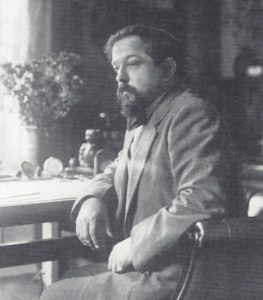 Istomin’s recitals often featured Claude Debussy. He used to play some of the Preludes in small groups, ranging from two to four. In addition to poetic ones (his favorites were La terrasse des audiences du clair de lune, Les sons et les parfums tournent dans l’air du soir, and Les Collines d’Anacapri), he also chose humoristic ones (particularly General Lavine – eccentric and Minstrels). In the late 80s, he added the first book of Images which he performed frequently, and he prepared Estampes, without ever playing them in public.

For Istomin, Debussy was an antidote to the large place which Germanic music held in his repertoire. It provided another way of playing the piano, a different contact with the keyboard and a more relaxed and sensual sound. He delighted in finding the infinite nuances of color and light in Debussy’s music. He gave many master-classes on Debussy, often referring to the French Impressionist school of painting which he knew so well.

There are very few recordings of his playing Debussy. In 1968, Columbia recorded La fille aux cheveux de lin and Clair de lune for an “encore album” which was never issued. Both recordings were finally revealed some fifty years later in the Sony boxed set compilation of his complete solo and concerto recordings. The 1987 Adda CD, which included the first book of Images, was unfortunately made in far from ideal acoustics. Other documents include a video recording made in March 1973 by the French Television with two preludes (Voiles; La sérénade interrompue)  and a recital filmed in Montreux in 1989, where he played General Lavine – eccentric.