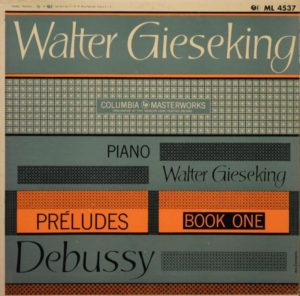 Eugene Istomin deeply admired Ezra Pound and Louis-Ferdinand Céline as writers, while finding their political attitudes totally unacceptable. He felt the same way about Gieseking. He had discovered Ravel’s Gaspard de la Nuit and some of Debussy’s works through Gieseking’s records. When Istomin first performed concerts in France, he was sometimes compared to Gieseking, but it made him uncomfortable since he shared the conviction with Rubinstein that Gieseking had been a committed Nazi, and he remained deeply resentful.

In June 1954, he saw Gieseking at St. Peter’s Church in Prades. Gieseking had come with some friends to listen to Casals and Serkin playing two Beethoven Cello Sonatas and the Piano Sonata Opus 109. Gieseking had bought his own tickets and attended the concert incognito, without greeting anyone. Istomin felt that this behavior was a sign of respect for the great musicians whose life and career had been disrupted by Nazism and who had continued to remain faithful to their human ideals. Perhaps there was also a shade of regret. From then on, Istomin’s resentment was appeased.

The Debussy Ballade recorded in 1939 by Walter Gieseking.