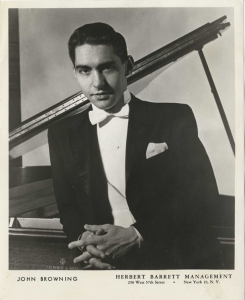 For Istomin’s 75th birthday, John Browning wrote: “I have known Eugene for almost 30 years. Of course, he is a superb pianist and musician. But Eugene is, along with his tremendous gifts, an extraordinarily and thoughtful friend and colleague. He concerns himself always with the welfare of others – their needs and problems – and he is always searching for ways to improve the status of musicians and the musical world.”

This esteem and affection were mutual. Istomin had decided he would never perform any work by Prokofiev, yet he admired the complete Concertos John Browning had recorded with the Boston Symphony under Erich Leinsdorf. He admired even more Browning’s dedication to Samuel Barber’s music. He was fond of his idiomatic but very personal interpretation of works as different in style as the Scarlatti Sonatas, the Concerto for the Left Hand by Ravel, the Diabelli Variations or the Chopin Etudes.

John Browning naturally participated in the adventure of the Kapell Competition. In 1987, Istomin invited him to join the jury and give a recital. Their views on both music and career were quite similar. Both of them deplored the artificiality of modern recordings which were peppered with editings and deprived of life. They even missed the era of the 78 rpm, when it was impossible to cheat. They also felt that young pianists lacked musical conviction and that, contrary to what one often heard about technique improving, that the overall level was going down. 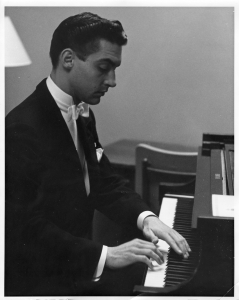 At the conclusion of an interview with Bruce Duffie, John Browning defined the role of the performer in terms that Istomin would certainly not have denied: “Obviously, the composer’s work has to be the most important, but the artist is the voice, the messenger, and it has to come out right through the messenger and with the messenger’s conviction, or it won’t work. … It’ll only come alive in the hands of the artist, the re-creative artist. The hard thing in the performance, the hardest thing in interpretation, is to get to the point where you feel you understand the composer and you feel you can also be yourself, where you aren’t being slavish to the composers. It’s not good enough to just assume that Schubert wrote forte here. You have to ask WHY did he write forte. If you know that, then you will be much freer in what kind of forte you do. There is a point where you feel you are intimate enough with the composer that you have a pretty good idea of what the composer wants…”