Between Vladimir Horowitz and Eugene Istomin there was a friendly relationship, not really intimate but very cordial. They saw each other and talked frequently on the phone. Istomin was a strong presence when Horowitz was going through difficult times, encouraging him to play in public again and trying to restore his confidence. When in 1974, after five years of silence, Horowitz contemplated returning to the stage, Istomin attended test recitals and rehearsals at Horowitz’ home and at the Met, even making a special trip to Chicago. Horowitz was deeply touched.

Horowitz playing at home for his friends

When they met, they used to play for each other – although more often than not, Horowitz was quick to monopolize the keyboard! Sometimes Istomin would come with an additional guest, like Clara Haskil on her 1956 American tour, or the very young Yefim Bronfman in the mid-1970s. These guests were astonished, Clara Haskil exclaiming: “At the piano Horowitz is Satan himself!” Istomin also brought Leon Fleisher who, later on, would often visit Horowitz. Fleisher relates his visits with a streak of humor in his autobiography: “I would go to Horowitz’s house and play my piece, whatever it happened to be at the moment. I know I played Beethoven’s Sonata Opus 10 No. 3 for him once. And he would listen, and nod, and say ‘Very nice, very nice, very nice’. Then he would push me off the piano bench and play for several hours, whatever was holding his imagination. I once got three hours of Clementi sonatas.” 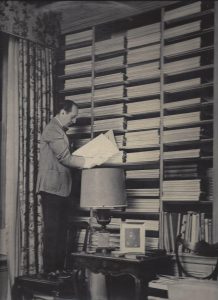 Horowitz looking for scores in his huge library

Horowitz liked to offer suggestions to Istomin about new works he should play, and Istomin took his advice several times. It is interesting to note that the way they chose their repertoire was quite similar. Both of them were only interested in playing works which they could fully inhabit, in which they had something very personal to say. This even applied to composers they were fond of, such as Rachmaninoff. Horowitz did not play so many works by Rachmaninoff: a single concerto, the Third, which he recorded three times, the Second Sonata (which he revised, with the composer’s agreement), six Preludes, five Etudes-Tableaux and a handful of other short pieces – and nothing more. For his part, Istomin performed three Rachmaninoff concertos: the Third only once when he was 19 (after which he dropped it from his repertoire despite a tremendous reception in Chicago), and two concertos that Horowitz had renounced (the Second and the Fourth). In addition to a few short pieces, Istomin set his sights on the Variations on a Theme by Chopin. One day, Horowitz had played them for him and said: “This is a work for you!” Istomin worked on them for three years, even going so far as to record them for himself, but finally gave up performing them because of the organizers’ reluctance to program this work on concerts.

Horowitz used to play Istomin numerous works by Medtner, a composer for whom he felt a special fondness. He encouraged Istomin to perform his works, especially Medtner’s Sonata in G minor which he had performed once at a Carnegie Hall recital in 1943. Eventually, Horowitz never performed it again – but Istomin played it in many recitals in the early 90s! Horowitz under the photo of Rachmaninoff!

When Istomin recorded the Rachmaninoff Second Concerto, Horowitz lent him his piano, the CD 18, which Steinway kept reserved for his exclusive use. It was the ideal piano for playing Rachmaninoff: the action of the keys was set to a minimum to allow for very fast playing and immediate clarity of the accents; the power and the dynamic range were also exceptional. This was not a piano to be put into all hands, as it required absolute control! Horowitz had never played this concerto in public, and knew with certainty that he never would. He thought that Istomin was the pianist who could best do justice to this work, and he therefore made his piano available to him, which he had never done for anyone before. It was a mark of confidence which touched Istomin and of which he was very proud. Later, Istomin would eventually buy the CD 18, have it re-adjusted, and travel with it on tour throughout America. 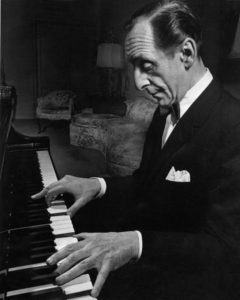 In the past, as a young student at Curtis, Istomin sometimes made fun of the imperfections in Horowitz’s recordings, infuriating Serkin! After this moment of young arrogance had passed, Istomin always declared his greatest admiration for him. He talked of Horowitz’s playing as something which made his hair stand on end, saying to James Gollin: “This is marvelous! This is Hollywood lights. It’s bubbling champagne! It’s the sparkle. This is fountains of sperm!” He was fascinated by Horowitz’s ability to play with completely flat fingers. The last joints of Horowitz’s fingers could rise and retract with an extraordinary elasticity. As a result, this gave his playing a velocity, power, ability to accentuate, clarity, and crystalline sound which was utterly unique. His fascination with Horowitz’s playing, combined with the pain he often felt in his fingertips (he had to keep his nails cut very short so that they would not make any noise on the keys), caused Istomin in the 1970s to change his hand position and attack the notes with much flatter fingers. He was aware that the anatomy of his hand did not allow him (and indeed did not allow any pianist) to play like Horowitz, but he felt that the change might have beneficial effects. It scarcely changed his sound, but it somewhat destabilized his technique for several years, and ultimately he felt that it was better to play with his fingers a little less flat.