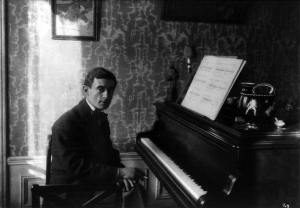 Eugene Istomin performed Ravel’s Gaspard de la nuit over many years, from the mid-forties to the mid-sixties. He had discovered it through a recording by Walter Gieseking, and loved it so much that he gave the complete cycle twice at Carnegie Hall, in 1948 and 1964. He even dared to play Ondine as an encore at a concert with the New York Philharmonic in the huge outdoor Lewisohn Stadium, after the Emperor Concerto!

Cover page of the manuscript of Gaspard de la nuit

Istomin also played Jeux d’eau, and he picked it up again in the eighties as a means of private relaxation during the arduous task of preparing Rachmaninoff’s Fourth Concerto. Despite never having performed the Tombeau de Couperin in public, he knew the piece very well and gave several master classes on it. He had become very familiar with the Valses nobles et sentimentales, an extremely demanding work in his opinion, when he helped his friend Shirley Gabis to prepare them at Curtis, but as she performed them on a regular basis, he did not want to appear to be competing with her by playing them himself. He gave up the idea of performing them at this time, assuming that there would be later opportunities, but his plans never materialized.

Istomin liked both the Ravel piano concertos, but he never considered playing them. He felt he had nothing really personal to say. 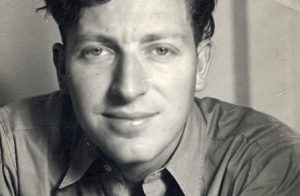 Paul Goodman in the mid 40s

In 1947, after hearing Istomin play Gaspard de la nuit at Mary’s Bar in Greenwich Village, Paul Goodman translated the three prose poems of Aloysius Bertrand which had inspired Ravel. Istomin henceforth included Goodman’s wonderful translation in the program notes of all his recitals in English-speaking countries.

“Listen – listen! – it’s I, Ondine, brushing these water drops against the sounding diamond panes of your window gleaming in the moon’s wan rays; and see how, in watered silk, the lady of the castle from her balcony watches the lovely starry night and the lovely lake asleep.

“Each wave is a spirit swimming on the streaming, each current a path snaking to my palace, and my palace is built of liquid, deep in the lake, in the triangle of fire, of earth, and of air.

“Listen – listen- my father is whipping the creaking water with a green alder-branch, and my sisters’ arms are stroking the foam of the fresh isles of weeds, of lilies, of flags; mocking the toppled hairy willow who’s fishing with a line.”

Having murmured her song, she begged me take her ring upon my finger, to be the spouse of an ondine, and to go to her palace with her, to be the king of lakes.

And when I told her that I loved a mortal, sulky and spiteful, she wept a tear or two; she laughed out loud and sped away in showers that trickled white long down my windows blue.

“What’s stirring round this gibbet?” – Faust

Ach, what I hear-could it be the night-blast yelping, or the hanged man heaving a sigh on the gallows’ fork?
Could it be a fly a-hunting, blowing round these deaf ears his fanfare of tallyhos?
Or else a spider weaving half of yard of muslin as an ascot for this strangled neck?
It’s the bell tolling at the city-walls, below the horizon; and the corpse of a hanged man, red in the setting sun.

“He looked under the bed, up the chimney, in the closet: – no one. He couldn’t understand where he had come in, where he had gotten away.” – Hoffmann, Night Tales.

Oh, how many times I’ve heard and seen him, Scarbo, when shines the midnight moon in heaven like a silver dollar on an azure banner sown with bees of gold!

How many times I’ve heard his laughter buzzing in the darkness of my nook, and his fingernail scratching the silk curtains on the bed!

How many times I’ve seen him coming down from the ceiling, spinning on one foot, and rolling round the room like a bobbin dropped by a witch !

And then I thought he’d gone? The dwarf grew huge between the moon and me, like the steeple of a Gothic church, tossing a golden bell on his pointed hat!

But soon his body paled, transparent as candle-wax; face whitened like the wax of the candle-end, – and suddenly snuffed out.