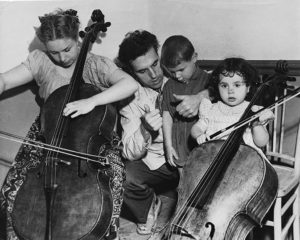 Eugene Istomin met Paul Tortelier in Prades at the 1950 Bach Festival. Tortelier had the utmost veneration for Casals. In his Self-Portrait (in conversation with David Blum) he recalled his memories of this first festival with Casals: “I will never forget the depth of feelings he brought, during a rehearsal of the slow movement of the First Brandenburg Concerto, in the poignant dialogue between the oboe and the violin. What I felt was inexpressible. It was the highest moment of my musical life. (…) Tears came to my eyes, we were all equally moved. It was not long before I knelt to Casals, as I would have done to Bach, whose spirit was thus revealed to us.”

Tortelier returned to Prades the following three years, as principal cello of the orchestra and to participate in chamber music concerts. In 1955, he could not be present because he had decided to spend the entire year with his family on a kibbutz in Israel.

When Eugene Istomin and Madeline Foley met with Casals to talk about the festival program for 1956, they suggested that Tortelier be assigned a Bach suite or a sonata, in addition to his participation in the Brahms Sextets or the Schubert Quintet. It seemed natural to them, considering Casals’ esteem for him and Tortelier’s loyalty. But Casals was very upset, imagining that they considered him too old and were already preparing for his succession. He refused outright. This argument caused Istomin and Madeline Foley to resign from the artistic direction which they had held since 1953. 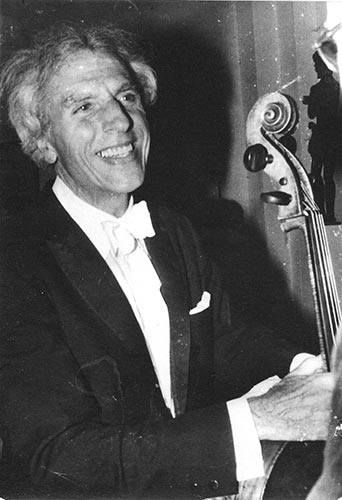 Paul Tortelier knew nothing of this dispute. His path rarely crossed that of Istomin, until the spring of 1980. Istomin, Stern and Rose were to participate in a major Brahms festival, mixing chamber music and concertos, with the Detroit Symphony under Antal Dorati. Unfortunately, Rose injured his right arm a few days earlier. The program had to be modified at the last minute and another cellist had to be called in urgently. Istomin and Stern asked Paul Tortelier, who had not performed in the States for about ten years, and who arrived at the last minute. Tortelier, still as unpredictable as ever, managed to make the audience laugh and to irritate Istomin even before he had played a single note! Sitting just in front of the piano to play Brahms’ First Sonata, he turned around to look at the huge Steinway, lid wide open, and pretended to be afraid! He took his stand and chair and went to sit at the very edge of the stage, as if he wanted to make sure the audience could hear him! Nevertheless, it was a beautiful performance, which was warmly received. As for the First Piano Quartet which closed the concert, with Jaime Laredo and Stern joining them, it was a triumph! Thus, Tortelier became the third cellist with whom Istomin performed in duet, after Casals and Rose.

J.S. Bach. Suite for Cello Solo No. 1 in G major BWV 1007, Prelude. Paul Tortelier filmed in July 1990 at the Abbey of Saint-Michel-de-Cuxa, celebrating the 40th anniversary of the Prades Festival .