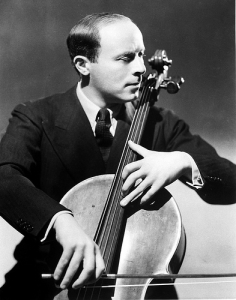 Ever since Casals had renounced playing in public, Feuermann was regarded as the world’s greatest active cellist. Casals himself held him in the highest esteem, both as an instrumentalist and as a musician. The whole musical world mourned him when he died prematurely from surgical complications on May 25, 1942. He was only 39.

Emanuel Feuermann began teaching the cello at Curtis Institute in 1941, where he was also set to teach chamber music. It was there that Istomin first met him and attended his concerts, a complete series of Beethoven Sonatas and a recital at the Curtis on March 27, 1942. Feuermann played the Schubert Arpeggione Sonata and Stravinsky’s Suite italienne, among other works. Istomin was “thrilled and entranced” and considered Feuermann to be the equal of his great idol, Jascha Heifetz. He told James Gollin: “I was a Heifetz-Feuermann man!” At that time, Istomin believed in the progress of performing art and was convinced that every new generation would surpass the previous one. When invited to the Prades Festival in 1950, he feared being disappointed by an aging Casals, unable to rival Feuermann’s virtuosity. The rest is history.