Speech delivered by Eugene Istomin at Columbia University Convocation in memory of Casals on November 8, 1973

The only adequate way that a musician could possibly try to properly eulogize Pablo Casals is through music itself. But it is words I have to find at this moment! It is not easy for me to overcome a rather strong resistance to speaking of the man who was as close to me as my own father. Little did I imagine that perhaps some 24 years ago when I went to visit him in Prades, southern France, an awe-struck but slightly skeptical young man, confronting the venerable, legendary figure of 72 years of age, that I would become one of the central handful of people to accompany him through another quarter of a century, and finally to his death – and be standing here on this occasion.

Yet Casals belongs in largest measure to all of us, and so it is my duty to share with you some of what I knew of him, and the legacy, that his great life has left us.

I shall try not to repeat what has been said again and again in homage and honor to him on those countless occasions during his life: that he was a genius in the interpretation of music; an expert composer of total honesty ; that he was a great humanist, one of the noblest and most courageous fighters for peace, is of course known to everybody. He remains one of the most famous and beloved men of the century. I (would) therefore prefer to speak a few words about his personal character.

First of all, he was born with an enormous, piercing kind of a sensitivity and a receptivity to all experience. He had a gargantuan vitality and strength, physical strength. He had an equally great need to communicate his emotions, and the means to do it. What means! It was one of the loveliest and most innovative instrumental gifts in musical history. That was Casals! His nature was a curious balance of contradictions. He was an extrovert, but he had a tremendous interior life. He was a charmer, he was even a mesmerizer, but there was not a trace of the superficial in him. He was incapable of the vulgar in any way, in any possible way … yet he was an extremely outgoing man.

As a symbol of political democracy and liberal humanism, he was himself rather a monarch, a different kind of monarch than we are used to thinking of –perhaps a monarch of earth, of guts, tears and heart. That was the kind of monarch he thought that every human being had within himself. In his company you were immediately disarmed by his own defenselessness; that beautiful vulnerability that emanated from him was his greatest power. He compelled you to the same defenselessness in response to his own. And how wonderful it is, in this day and age, to be without armor with another human being! That seems to me as good a definition of love as any. He was of course completely aware of his own magnetism and used it constantly and unabashedly. He knew that if he looked for the best in you he would find it, and make you find it in yourself. No amount of destruction, cruelty, callousness can dim the experience of love. Yet knowing this to be true we continue hating, destroying and protecting our so-called personal “interests”.

Casals was incapable of hatred, but he was often moved to great indignation and even rage at human anti-humanity. Most of us throw up our hands, shrug our shoulders and go on with our ways. He went on, too, as we all know so well, but he yelled and wailed out his anguish and protest with a passion, and, just as in his playing, with a unique eloquence. Powerful voices such as his throughout history have – alas- not yet prevailed. But what would it be like without them!

As most people of his stature he completely rejected any credit for his gift, but only felt a responsibility for its use. He would often complain: “Why do they praise me? I do only what I have to do; after all, I did not make my talent.” Nonetheless he was rewarded as few men, by a long life of meaning and accomplishment, and the love and respect of millions, as we all know. In his intimate group of friends, he was adored as something of a beloved grandpa and firstborn baby at the same time. 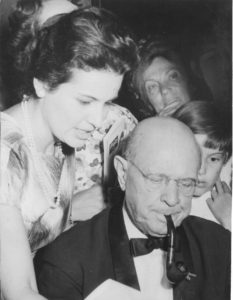 And crowning all this in his last 17 years was his marriage, as beautiful as it was exceptional, to his young student, Marta Montañez. In that relationship, which certainly prolonged his life, he transformed a devoted young girl into a noble woman of a strength approaching his own. It was invariable with Casals that he received the maximum from people, but left them with more.

I would like to close by telling you of an incident that took place during one of my last visits to him, just prior to his final hospitalization. It was the week of October the tenth. I went down there to spend as much time as I could, knowing how ill he was. And I knew that the thing that always soothed him and took his mind off of his suffering (which was extreme at that time) was music, and talking to him about it, and playing it for him, and playing records, and “what have you”. The day before (I had had to go back for a few days only to come back to Puerto Rico later), he was in considerable agony. He had an oxygen tube attached to his nose and was sitting in a small den and saying that he was dying, that he just could not get any breath. At one point during all this pain, he looked up at me and he said to me : “Play … I want to live !” Well of course, I was overwhelmed and terrified, and I called his wife in, and said to her: “I am going to open all the doors and go into the large room and open the piano as wide as I can.” And I went in and began to play a Beethoven Sonata.

Within a minute or two, out of a corner of my eye, I saw that he had been wheeled in. He had gotten out of his chair, had thrown off his oxygen, that was keeping him going, and insisted on coming into the room to listen. And he sat half an hour, listening to me play my heart out for him, quite content and not in need of the oxygen at this moment.

Well, all I can say to all of us is “Good night … Sweet King ! You see that you still live by illuminating, by continuing to illuminate all our lives !”

Below is a brief excerpt from a miraculously saved document…