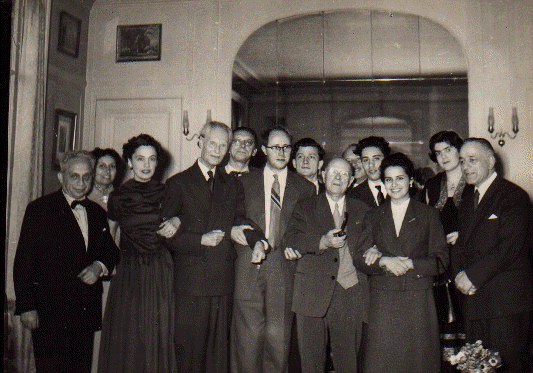 Casals between Slava and Martita (Paris 1957)

“In 1957, I came to Paris to be a member of the jury for the Casals Competition, and that’s where I met Martita. Meeting her overwhelmed me. She was so young and beautiful that my respect for Casals grew even more! They had just gotten married. She took wonderful care of him, as he had had a heart problem a short time before.

I went to meet Casals at his hotel. He was in the lounge with about twenty people sitting around him. Casals told me that he had heard so much about my great talent that he was very eager to hear me. So he invited me to his room, which was small, and I had to sit on the bed. I played, just for him and Martita, a Bach Cello Suite. I was so impressed that I cannot even remember how I played. Casals seemed happy and gave me complimentary praise. Then he told me: “Now I am going to play for you”, and he played another Bach Suite. We were so close that I had the cello endpin between my feet. I think I’ve never been so moved in all my life: Casals playing for me, so close! It was our first meeting, a very friendly one.

Rostropovich in the mid-70s

Thereafter, we saw each other more and more often and made a lot of music together. The first time I conducted for him, it was the Beethoven Triple Concerto with Stern and Rose. We have given many concerts together with the National Symphony. These are very good memories, but my greatest pleasure was to invite him to my Evian Festival to play chamber music with me, to play Beethoven and Brahms. I would have liked to play also Tchaikovsky’s Trio – I insisted, but he refused. I never understood why he didn’t want to play more Russian music because, for me, there is no doubt, his soul was Russian! His recording of Rachmaninoff’s Second Concerto is terrific, and he understood his Fourth Concerto better than any other pianist ever. I tried to make him fond of Shostakovich and Schnittke, but I didn’t really succeed. 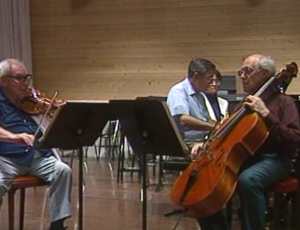 Stern, Istomin and Rostropovich rehearsing the Archduke Trio at the Evian Festival 1990

I remember that he had organized a concert at the Juilliard School in memory of Alexander Siloti. He asked me to participate and of course I accepted. I conducted the student orchestra and I played a movement of the Rachmaninoff Cello Sonata with him. We shared many very special moments: the inaugural concert of Ronald Reagan (when Eugene kindly agreed to replace Rudi Serkin and play a Mozart Concerto, despite his contempt for Reagan), my 60th birthday at the Kennedy Center where he came to play with Isaac Stern. Our greatest experience was probably the Archduke Trio in Evian, also with Isaac. It was incredible! Later on, we joined for the opening concert of the Casals Museum in El Vendrell, with King Juan Carlos attending. We had a lot of great moments outside of music, especially in Washington, very happy moments, and insignificant ones, which I wouldn’t dare tell! Eugene told me a lot about his life, and I about mine. We didn’t talk much about politics because we agreed on the essentials, except that I hoped to return to Russia and he had given up the idea. 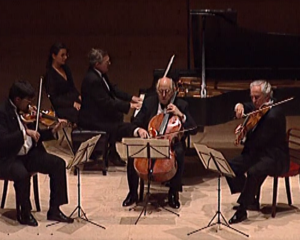 Kavakos, Istomin, Rostropovich and Giuranna at the Evian Festival 1992

I loved him as a musician and as a friend. He was very modest and tormented, but he was an exceptional pianist and a great musical personality. He had his own sound, so beautiful! He was a Russian pianist, from the old Russian school, Anton Rubinstein’s and Siloti’s. The Soviet system perverted everything. They wanted to prove that the Soviet system was the best. You had to play very fast and very loud, and that’s all. Gilels, Richter, Oïstrakh started that way. It was only later that they gave priority to the music, but they remained exceptions. So many others have never tried to deepen their understanding of music. Istomin, too, had been a very great virtuoso when he was young, with a lot of temperament, but he always thought of the music. He found his own way, never blindly following tradition. In fact, he played the same way he was as a man. His playing was very personal, very interesting. He thought a lot about everything he played, and he had very strong ideas. In Evian, when we were rehearsing the Archduke Trio or the Brahms Piano Quartets, it happened more than once that he disagreed with what the others were doing. He would immediately interrupt, tapping on the piano to mark the tempo, or singing the phrase. And none of us argued, because he was right! 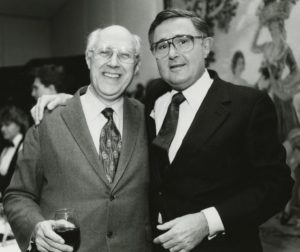 It was not only about performing music that he had strong ideas. In his relations with the music world, he didn’t want to make any concessions, and he always said what he thought. Unfortunately it has had a very negative impact on his career. I remember that when I came to Puerto Rico in 1976, Eugene told me that he was unhappy with his manager and that he was looking to change. I talked to my manager, Ronald Wilford, who had come to the concerts. Wilford was then, by far, the most influential manager, and he was willing to welcome him. Eugene did not accept because he had no esteem for Wilford, in human terms. It was a pity. He needed a management that really defended him, that valued him for who he was. He never had it, and this could have changed everything.

At the end of his career, he did not get the recognition he deserved. He didn’t have a competitive spirit at all. He did nothing to be brilliant or to seduce. So much so, that he does not have the place in the musical world that he should have. He was unhappy about it, and so was I. Now that he is dead, I think that time will give it back to him, because he was a very profound musician and a great personality. It is essential that his recordings be re-issued, and his biography published!

One day, after a master class at Manhattan School, Marta told me that he was going to be 75 and that he had decided to stop playing in public. I immediately thought that we had to do something exceptional, a great night in New York with all his friends. It was my idea! I would have liked to play again a trio with Eugene and Isaac, but Isaac was too tired. So we played the Andante of the Rachmaninoff Sonata. 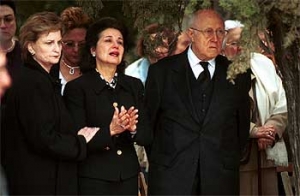 Marta and Slava at Istomin’s funeral in El Vendrell

When he died, I lost a great friend. Of course, I went to his funeral. It was a very special funeral. To be buried like this, close to Casals! I cried as I was playing the Bach Sarabande. I miss Eugene very much.

Interview with Bernard Meillat in August 2006 in Paris. Translation from Russian by Elena Mashkova

Notes: Pianist, a Biography of Eugene Istomin by James Gollin, was published in 2010.
Eugene Istomin, The Concerto and Solo Recordings (boxed set of 12 CDs) was issued by Sony in 2015.