When he finished his studies at the Curtis, Eugene Istomin was considered to be an exceptional talent who was destined to become a super star. His career was indeed remarkable, in terms of its duration (almost 60 years), its density (more than 4,000 concerts), and of the high standard of his achievements, as illustrated by his recorded legacy. But it leaves one feeling frustrated that this career did not go any higher and further, and anxious to understand why. Many reasons have been mentioned over the pages of this site, but it is thought-provoking to bring them together and put them into perspective.

Istomin’s debut was hastened by the entry of the United States into WW II and quite soon, he found himself propelled to the forefront of the American music scene, without being really prepared for such sudden fame. He immediately chose concertos which were the prerogative of mature pianists, refusing the easy success that virtuoso concertos, especially the Russian ones, might have brought him. In his recitals, he arranged eclectic programs because they reflected the richness of his own musical universe, without taking into account the prejudices of the critics, who tended to catalogue musicians and regarded it as impossible for a pianist to excel in both Chopin and Beethoven. 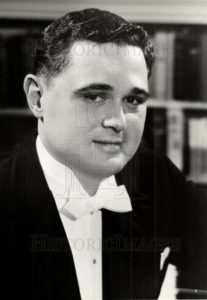 Some regretted his lack of charisma, but it was in fact an increasing unwillingness to seduce the public. The emotion had to be generated only by the music, not from his gestures or facial expressions. Part of the audience might be disappointed by his great sobriety, but Istomin was not willing to indulge in such tactics, nor did he embark upon a long series of encores to give the impression of a great success.

Istomin also refused any demagogy and concessions in his professional relations, regardless of whether this involved conductors, organizers, managers, journalists, or even his own record company. He never made any insincere compliment or approached people in order to win over those who might be useful to his career. He did not hesitate to state frankly what he thought about those who proved to be incompetent.

In the same way, he did not seek the support of any lobby. He did not want to highlight his Russian origins, which would have aroused considerable curiosity from concert goers and provided him with the backing of a very active community. Istomin was long in the service of the Democratic Party and the government institutions. He offered his time and talent to help Israel on many occasions, and threw all his energy into defending numerous causes – but it was out of the question for him to hope for a favor in return, much less to ask for one. 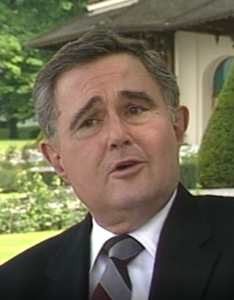 Interviewed about his career and the evolution of musical life (1992)

With this philosophy and attitude, it is even amazing that Istomin reached the top in the late 1950s. William Steinberg had predicted that it would take him a long time because “he was no type for managers”. In fact, Istomin owed much of this rise to the support of great musicians of the older generation: Adolf Busch, Pablo Casals, Artur Rodzinski, Paul Paray, Fritz Reiner, George Szell, Eugene Ormandy, Charles Munch, Bruno Walter, Antal Dorati… In the 1960s, this generation disappeared and Istomin’s career was gradually affected. It was actually the whole of American and then European musical life which was disrupted. The development of the LP and the boom in transatlantic flights profoundly changed the expectations of the public and the lives of the performers. The Van Cliburn phenomenon revealed that there was potential for financial, political and media exploitation in classical music, which became a business almost similar to any other. It was no longer the musicians who set the standards, but the marketers of the record companies.

At Oppenheim’s instigation, Columbia played a major role in Istomin’s rise until 1960, but the hostility of a new director of the Artists and Repertoire department, combined with Istomin’s intransigence about the promotion, resulted in a clash. His recording activity as a soloist slowed down and ended definitively in 1969. In the long run, the damage proved to be considerable. 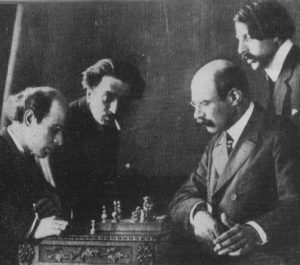 Istomin declined to adapt to the new ways of musical life, preferring to keep his musical and human ethics intact, regardless of the price to be paid by his career. At times, he felt anachronistic, like a musician from the old days. Until the middle of the 20th century, performers were loved and celebrated for the happiness they brought. No one minded if they played a few wrong notes or had occasional memory lapses! What counted were the beauty and the emotion they transmitted.

At that time, during the summer, musicians were free  to work on new repertoire or to get together and make chamber music for their own pleasure. During the winter season, they played everywhere, even in small towns. With the emergence of the LP and the growth of air transport, modern musicians played only in the metropoles, in front of supposedly sophisticated audiences, without any break due to the multiplication of summer festivals. The public came expecting to hear the perfection of the discs at the concert, to the detriment of emotion and freedom.

At the beginning of his career, Istomin believed in musical progress, and was convinced that the disc was a beneficial instrument for the propagation of musical culture, but gradually he became somewhat disillusioned. The record was in fact a lie which trapped musicians in an artificial perfection which they were condemned to replicate at the concert. To his great regret, Istomin admitted that he was also a prisoner of this obsession, and that this often led him to play defensively, giving priority to control over inspiration. 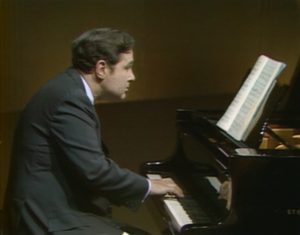 For Istomin, who suffered so much from stage fright, this caused additional tension and doubts, and contributed to destabilizing his natural technical facility which was so great that for many years he did not need to work on technique in a systematic and organized way. Sooner or later, all instinctive performers, often young prodigies for whom mastery of the instrument seems innate, are confronted with the need to “understand” what they had previously done without questioning themselves. They find themselves helpless in the face of technical difficulties which did not exist for them, and that nothing and no one has prepared them to confront. The most famous example is that of Yehudi Menuhin. This same phenomenon also appears in regard to memorization. Istomin used to jokingly say that in his youth he was able to learn a Mozart concerto in three days, while later on he needed three years.

In terms of piano technique and memorization, Istomin questioned himself at different stages of his career, but he did not change his fundamental principles and never wished to emulate Kapell or later, Pommier in the field of methodical discipline. He was too attached to an intuitive approach that corresponded to his Socratic concept of knowledge, which is based on reminiscence, and technically, to his work practice which was based on repetition. 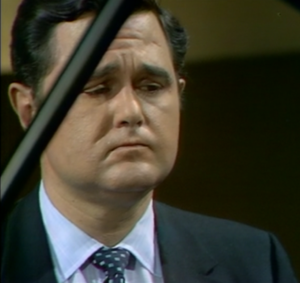 The reasons why Istomin limited his repertoire are related to his stage fright and manner of working. His spectacular debut forced him to play his repertoire for the first time in the most exposed places, which was stressful. At the same time, Istomin had the opportunity to experience the relative feeling of security and confidence provided by performing the same concertos (in his tours with Busch) and the same recital programs (in the Community Concerts) many times in a row. Moreover, he was never able to devote much time to learning new works in his later career. There were many good reasons: the organization of the Prades Festival, the activity of the trio which disrupted his calendar, his political commitment, and his passion for literature and the arts, not to mention baseball (he once said that the time spent watching baseball games had cost him three Beethoven sonatas in his repertoire). There was also the desire not to stop playing in public for long periods of time, as he feared he would be even more overwhelmed by stage fright when he resumed concertizing. And then there was sheer laziness, which he readily confessed and had been the corollary of his exceptional talent. 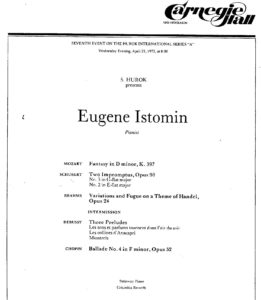 Program of Carnegie Hall recital in 1973

The relatively small size of his repertoire clearly had a negative impact on his career. His recital programs were not sufficiently  renewed over the years for the organizers to invite him again, even after a great success. For concertos, he only proposed seven or eight which most of the great pianists also offered. On the contrary, some of the works he had prepared were too rare and unattractive to be accepted by many organizers (the Fourth Concerto and the Chopin Variations by Rachmaninoff, or the Symphonie Concertante by Szymanowski). It is difficult to evaluate the role that a more adventurous approach to repertoire might have played in Istomin’s personal musical development and career. Pommier often encouraged him to do so and remains convinced that pleasure would have prevailed over stress, and that Istomin would have gained in freshness and motivation. To hear him play works that he had never wanted to present to the public, one would be tempted to prove him right – but at the untold cost of how much effort and tension? Quite often Istomin turned minor annoyances, anger, pain or illness into positive energy and played sublimely, but he did not want to put himself in an exceedingly dangerous position at every concert, and preferred to balance an acceptable combination of security with artistic requirement.

It is tempting to dream of the very different paths that his destiny might have taken, for example by imagining what would have happened had he continued his training with Siloti and would not received Serkin’s Jansenist education. In any case, it is fascinating to see how Istomin managed to overcome so many objective and subjective obstacles. He needed luck, but above all an exceptional determination! He was the only one amongst an exceptional generation of American pianists (Kapell, Katchen, Fleisher, Graffman, Lateiner, Lipkin, Janis, Rosen…) to complete the adventure, escaping accidents and illness, avoiding serious injuries, and managing to overcome doubts, stage fright, prejudice and frustrations. He did not make it easy on himself, admitting that in the early years he was his own “worst enemy”. He often acted like Don Quixote, fighting against the Philistines of music and refusing all concessions. One could regret that the end of his career did not bring him the recognition he deserved, and that his recording legacy, which has recently been made accessible, has not been significantly more important and given him a larger place in the pantheon of pianists. Nonetheless, he harbored no regrets: “I chose the path. I am responsible for my mistakes and shortcomings. Yes, that’s enough for me. I don’t think about posterity. It is the composers who allow you to get as close as possible to your personality as a man and a musician. It is the great composers who are eternal. The interpreters are just passing.’’ 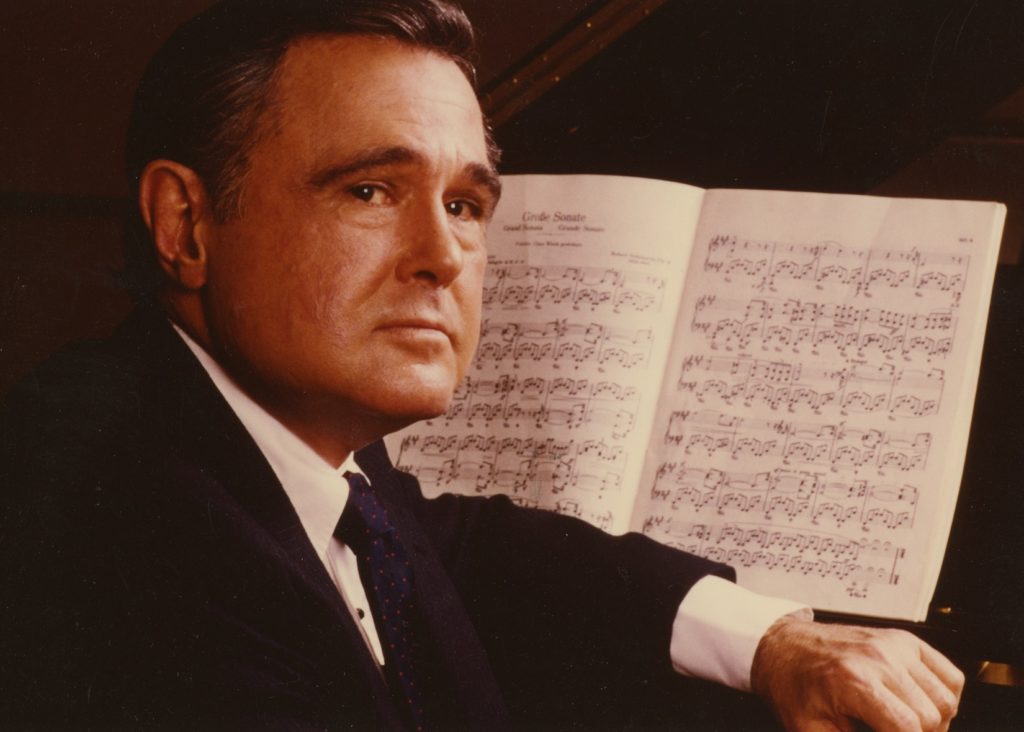