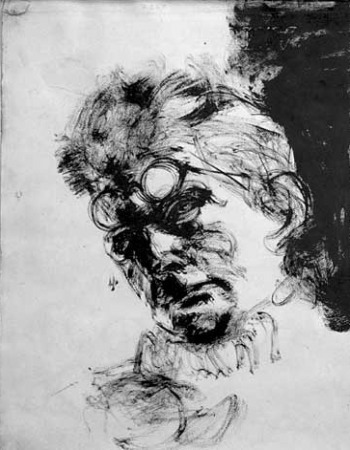 Samuel Beckett by Arikha in 1967

Avigdor Arikha was a very close friend of both Samuel Beckett and Eugene Istomin. It was natural that he introduced them to each other, all the more so as they had so much in common. First and foremost, they shared an inclination for spending entire nights talking, combining the exhilaration of words and alcohol. They also shared a pessimistic vision of the world, along with a sense of humor and self-mockery, generosity in friendship, a passion for languages (with a predilection for French, with its sensual richness and clarity), and an enthusiasm for poetry. They were voracious readers, with unlimited curiosity, while remaining both fascinated by and suspicious of literary knowledge. In art, they liked challenges and demand, rejecting incidental details in order to reach the essence. In life, they shared the same love of freedom and the same distaste for the incompetent people who ruled over the literary and musical worlds. Surprisingly, both maintained a passion for sport, which converted them at regular intervals into avid television viewers, Beckett of rugby, and Istomin of baseball. And of course, there was music. It was at the very heart of Beckett’s life. He had played the piano and stopped only because of Dupuytren’s contracture which paralyzed his fingers. His wife Suzanne was also a pianist, of nearly professional level. Anne Atik, in How It Was, A Memoir of Samuel Beckett, mentions his musical preferences, which correspond exactly with the core of Istomin’s repertoire: Mozart, Beethoven; the intimacy of chamber music rather than orchestral displays; the lieder of Schubert …

They used to meet in Montparnasse cafés or at Arikha’s whenever Istomin was in Paris. They wrote to each other, generally laconic messages. Beckett dedicated most of his books to Istomin in the 70s and 80s. Istomin reciprocated by signing his records. When Beckett received the complete Beethoven Trios, he answered: “All my thanks for splendid recordings and very good wishes for 1971. Very cordially.” It inspired Beckett to write a television drama entitled Ghost Trio in which the Largo of Beethoven’s Trio Opus 70 No. 1 plays an essential part! In 1976, he sent Istomin his short novel entitled Sans with this inscription: “Listening to K. 493, as a tribute. March 1976”. It referred to the recording of Mozart’s Piano Quartet in E flat which Istomin had made in 1957 with Isaac Stern, Milton Katims and Mischa Schneider. There were also book exchanges, often through Avigdor Arikha and Anne Atik, such as the biography of Jules Laforgue by David Arkell, Looking for Laforgue, which was of great interest to Beckett. 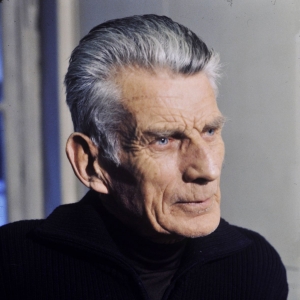 In 1982, Beckett, solicited by the Association Internationale de Défense des Artistes victimes de la répression dans le monde (IADA), wrote a short play in French entitled Catastrophe, which was premiered at the Avignon Festival in July 1982. It was dedicated to Václav Havel, who was in prison at that time. It was immediately banned in Czechoslovakia. In 1985, Istomin was a member of the American delegation to the Budapest Cultural Forum. Together with the playwright Edward Albee, he championed Václav Havel, braving the Czech communist delegation and calling for the ban on Beckett’s play to be lifted. As one could expect, all his efforts were in vain.

During the time Istomin was advisor to Jovanovitch for the publishing house HBJ’s special projects, he planned a book about Arikha and asked Beckett, who had already written a short text for the catalogue of a Paris exhibition, to prepare a longer one. Anne Atik quoted a beautiful excerpt from his book: “Throughout his development, I never ceased to admire the acuteness of his vision, the steadiness of his technique, his unfailing apprehension for the art of the past, and of the mortgage which weighs down its future. It is undoubtedly due to this double awareness, both displaced and implicit in his work, that he owes his singular loneliness.” Because of financial difficulties HBJ had to give up many plans, including this one. Beckett eventually re-used his text in Plafond.

Here is a postcard sent by Samuel Beckett in March 1977 after he received the Odyssey reissues of Istomin’s recordings of the Schumann, Chopin and Tchaikovsky concertos:

Dear Eugene, Many thanks for records received from Avigdor. Great playing. Balm to ear and heart and mind. Bravissimi. Affectionately yo you both and à bientôt I hope. Sam.