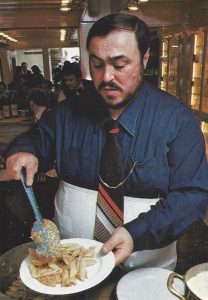 After his marriage to Marta, Eugene Istomin was more willing to accept some public relations obligations. He took part in a few formal evenings on condition that they be organized for the purpose of aiding a generous cause, and only if they were held in a friendly environment. In March 1977, he attended a dinner which was covered extensively by the press. It celebrated the premiere of a new production of La Bohème at the Met, featuring Luciano Pavarotti and Renata Scotto. On this occasion, George Lang, the famous restaurateur, had invited both singers to his own home in the company of a few personalities and friends, including Marta and Eugene Istomin.

Pavarotti prepared a pasta dish of Pennoni with tuna, Renata Scotto made a Tagliatelle with walnut sauce, and Marta made Chanfaina (Catalan Eggplant). Wines were sumptuous and the guests were in a very happy mood. After the coffees and an 1846 Cognac had been served, Istomin gently declined the invitation to play the piano alone, but he agreed to accompany Pavarotti and Scotto in a duet from Traviata! He did not need the score, since he knew every great opera by heart. Pavarotti felt very comfortable and told him: “It’s so easy to sing with you”, and suggested a Neapolitan song, ‘A Vucchella. Istomin improvised the accompaniment the same way he used to do for his parents when they sang popular Russian songs.

Tosti. ‘A vucchella.  Luciano Pavarotti, accompanied by Leone Magiera, during a recital in Salzburg on July 31, 1976.