On May 25, 1982, Eugene Istomin was at the Kennedy Center with Isaac Stern, Leonard Rose and Mstislav Rostropovich to pay tribute to their friend Abe Fortas, who had died a few weeks earlier. There were three moving speeches and a great deal of music. 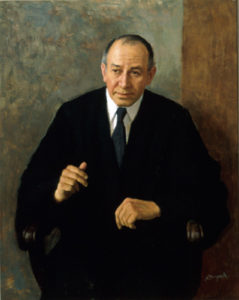 Abe Fortas in his uniform of Supreme Judge

The journalist Eric Sevareid portrayed Fortas as a “poor boy from Memphis” who was born “rich in mind, in courage, in that inexplicable instinct for what is tasteful and beautiful and lasting.” He said that “We cannot explain a man like this, but we can be glad he was around” and retraced Fortas’ career as a lawyer: “He was a founder of what became one of the country’s most famous and admired law firms. He argued and won the Gideon case before the Supreme Court, so that the poor accused in criminal cases shall have legal counsel provided. As a justice himself, he wrote the opinion that guaranteed more of the constitutional rights for juveniles who find themselves before the courts. The poor he helped, the young, and, in dramatic degree, the falsely accused, the reviled, those whose good name were their only real asset – the so called ‘loyalty’ cases. Absolutely no one did more than Abe Fortas to protect innocent, patriotic Americans from the ravages of that maniacal McCarthy period.” Sevareid also noted that his resignation from the Supreme Court in 1969, when his enemies suspected that his links with his former clients and the political power could undermine his impartiality, was “an act of conscience that proves that he was exactly the kind of person that the Supreme Court cannot do without.”

The second speech was delivered by Roger Stevens, who had been the first president of the National Arts Foundation and the Kennedy Center. He spoke of Abe Fortas’ deep involvement in political and cultural life. Abe Fortas had been at the origin of the creation of these two great institutions and had played an essential role in the birth of the Hirshhorn Museum of Modern Art.

Isaac Stern, whom Fortas had helped so much to save Carnegie Hall from destruction, then spoke of the musician. Abe Fortas had learned the violin in his childhood and had continued to play all his life. His greatest pleasure was playing quartets, and every Sunday evening, he would gather his musician friends to play the great works of this demanding repertoire. Stern recalled that Abe Fortas was an amateur musician – amateur in its original sense of “lover of”, that he never felt more comfortable than when he was surrounded by musicians, and that “music was for him the symbol of man’s continual effort to overcome his weakness and find beauty.” Stern then joined the musicians with whom Abe Fortas played each week, to perform his favorite piece of all: the Andante of Mozart’s String Quintet in C K. 515. 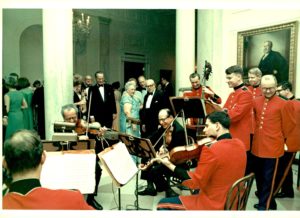 Alexander Schneider loved Abe Fortas as a human being and esteemed him as a musician. In his memoirs, Sasha, A Musician’s Life, he told a funny anecdote. In January 1968, Schneider attended a dinner at the White House with prestigious guests. There was music, as always, and some musicians of the Navy were playing. As he was leaving, Sasha had the idea of borrowing two violins and of cajoling Abe Fortas into joining the other musicians present to play Mozart’s Eine kleine Nachtmusik. All the guests were stunned! Even President Johnson, who was very close to Fortas, did not know that he played the violin. He pretended to worry about whether the Supreme Court judge was in order with the musicians’ union, as otherwise there could be a serious problem!

Istomin met Fortas in Puerto Rico at Casals’ and they soon became friendly. Fortas was very attached to Puerto Rico. As a representative of the administration and later on as an independent lawyer, he had contributed to the recognition of the island’s partial autonomy, the drafting of its constitution and the establishment of its judicial system. 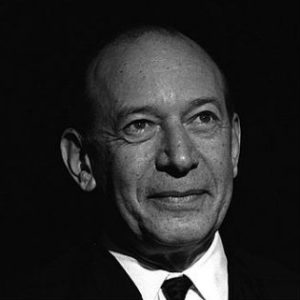 Due to his close ties to Governor Muñoz Marín, the first democratically elected governor, Fortas remained very attentive and available for a long time to serve Puerto Rico’s projects. He participated in the creation of the Puerto Rico Festival with Casals, and was instrumental in organizing Casals’ concert at the White House for Kennedy. Having observed the remarkable work done in Puerto Rico by Marta Istomin-Casals, he suggested that Roger Stevens entrust her with the artistic direction of the Kennedy Center in 1980. In other respects, Fortas facilitated Istomin’s contacts with the highest authorities in an attempt to improve the United States’ international cultural policy. Istomin even asked him to encourage Johnson to give more freedom to his vice-president, Hubert Humphrey, so that Humphrey could distance himself from the current Vietnamese strategy and thus increase his chances of winning the 1968 presidential elections.

On May 25, 1982, Istomin played the first movement of Brahms’ Trio in B Major Op. 8 with Isaac Stern and Leonard Rose, followed by the Andante from Rachmaninoff’s Cello Sonata with Mstislav Rostropovich.